We can’t help but look in awe when someone riffs away with amps that look like hi-fi consoles or vintage TVs. The Tone King Falcon Grande 20W 1×12 Combo Cream is one prime example of what we’re talking about, and its Supro-style circuitry is an appropriate match.

Tone King Falcon Grande described their product as one that features ultra-linear output stages that have cathode-based power valves. This entire technical talk means that it has been tailored to sound smoother, sweeter, and more inclined towards the ’40s or 50’s style. All in all, there will be no negative feedback.

The Tone King Falcon Grande looks the part, but it isn’t all retro. This is because it was manufactured with very high grades of PCB construction, an ironman attenuator, and even the integral acoustic lens that kills all treble beaming. This amp also relies on a couple of automatic equalizer adjustments and custom transformers in order to compensate for the specific tonal changes at different levels of volume.

If You Like the Blast of an American Tune Combo Amp

If you wish for your amp to give you everything it has to offer, then you definitely should try out the Tone King Falcon Grande. As we mentioned before, this electric guitar amp consists of tone and volume controls alongside 3-position switches for voicing that bring forth pristine levels of clarity for singing tweed compression.

Other than its beautifully transparent onboard power attenuator and tunable reverb, users of this amp can even adjust the tones that range from a minuscule whisper – all the way up to a scream! To top all of this off, the Tone King Falcon Grande’s cabinet has also been designed to deliver some of the sweetest tones ever, while it tames the harsh highs that happen when you’re standing adjacent to speakers.

If you’re on the lookout for a simple way to combine old-school tones with the simplest set of controls, then the Tone King Falcon Grande is the answer to your needs. Users have found this amp to have highly interactive controls that allow them to pull up a vast shade of detail, warmth, grit, and clarity. This flexibility is further enhanced with the help of foot-switchable voicing switch with 3 positions. With the help of this, you can take your sounds through Lead, Rhythm, and Tweed, and each progression has tube-amp overdrives and thicker compressions.

What’s Inside the Box? 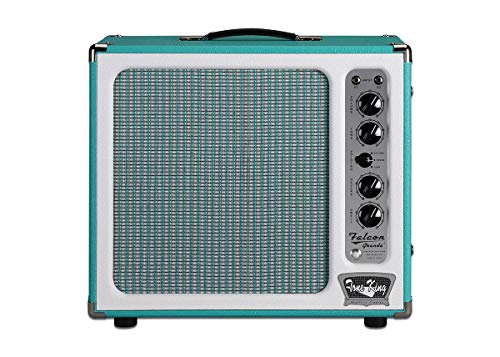 Tone King Falcon Grande 20W 1x12 Combo Turquoise
Check Price On Amazon
If you buy from Amazon, we earn a very small commission at no charge to you.

The original Falcon turned out to be very popular because of the fact that it offered its users with 3 parallel voicing modes that really changed the sound of the amplifier. The Tone King Falcon Grande offers the very same – with a few simple tweaks. It features a much more powerful Lead voice – which neither sounds biting nor fuzzy, 50’s style Tweed tones, and of course the 60’s Deluxe tones.

This amp has also been added with the acoustic lens inside the cabinet in order to eliminate all kinds of harsh highs which you would casually expect from this circuit. At the end of it all, you’re left with a sound that has been engineered for jazz, blues, and every other similar style.

When the original Falcon was launched, the most requested upgrade from past users was to give it larger speakers – specifically 12” larger. By doing so, the amplifier would be able to deliver lower end punches without the need to sacrifice its beautiful midranges.

Normally, to do this would require considerably more levels of power – which is why the Tone King Falcon Grande is upgraded from 12w to 20w. We know it doesn’t seem like a lot on paper, but in reality, it has the ability to deliver more volume and greater levels of headroom.

A lot of amplifiers out there have built-in reverbs, but Tone King Falcon Grande’s system remains unmatched. Based on the original’s outboard spring units for reverb during the 60’s – there were only 2 controls – the dwell and the volume. In this newer version, there is an extra control for dwell in the reverb that allows users to really dial in exact kinds of verb. Whether you want a dark effect, a more subtle one, a brighter one or even, a present effect – this amp can do it all!

This was added on request of past users of the original Falcon, and now users can easily switch between different modes of voicing. Footswitch control was also implemented in order to give the amp an added control over reverb while simultaneously making it perfect for the ‘gig environment.’

This is one final major update to the original Falcon and it offers six levels of attenuation. With these levels, you can easily switch between settings for just your room all the way up to gig volumes – all of this with just a simple turn of a knob.

Other than this, what really makes this specification special is the fact that it works in a manner to perfectly match the speaker’s impedance curves. While doing so, it also adjusts the tonality in order to keep the tone and volume at complementary levels.

Both of these amps have great histories, and they have sounded great over the years. Both are equally capable of delivering tones that users will easily be satisfied with. The Tone King was found to have some tones that seemed a little boxy sounding – which the Skylark encounters effectively.

In terms of aesthetics, the Tone King brings about higher magnitudes of nicer looks as opposed to the Skylark. It can even blend beautifully with the furniture of one’s living room.

At the Top of Sweetwater Players’ Lists

The Tone King Falcon Grande amplifier is known for its ability to deliver a high-quality playing experience with intriguing tones and the very best vintage designs. Now with the addition of their modern features, they should be at the very top of the Sweetwater players’ lists!

Sometimes, the nicest thing to with a guitar amp is just to look at it. Well, the Tone King Falcon Grande is not just appealing to the eyes – but to all of your five senses.

We hope our Tone King Falcon Grande review has been helpful. You might want to check out our list of the best guitar amps for church.