Our Neumann U67 Reissue Review

Founded 9 decades ago in Berlin, Neumann manufactures professional recording microphones. They are very well known for their production of microphones used for music production, broadcast, and live purposes.

While they did product cutting lathes for a while and were known for being a leading manufacturer, they do their best work when making high-quality microphones, and the Neumann U67 reissue is no different.

What Is the Neumann U67 Reissue?

The original Neumann U67 was produced during the 1960s. Long considered a staple in any recording studio due to how powerful it was and the smooth sound quality that it produced, the Neumann U67 was known for its use during formative years and was used in the production of a lot of modern music. While the original microphone is no longer available, artists have clamored for a microphone that meets the same high standards and offers great versatility and power, and this was received in the Neumann U67 Reissue.

This tube microphone is a reissue of the original and is sonically identical, thanks to using the same electronic design and capsule. Reproductions of the BN 12 output transformer were created, with meticulous attention to detail. Additionally, this powerful microphone has EF86 tubes chosen to provide the most similar characteristics of the original microphone while producing low noise. Additional changes include updating the microphone to current safety standards and requirements and to accommodate the higher filament current used in new tubes.

Who Is this Microphone Designed For?

This powerful microphone is designed to record beautiful vocals, making it a great option for both female and male singers. It features a beautifully balanced and full sound and offers incredible frequency response, making it a great option for any singer or musician who craves control over their sound. It’s incredibly versatile, and while it does a great job picking up vocals, it can be used for most any source without suffering from lower sound quality.

Due to the higher price tag of the Neumann U67 Reissue, it’s generally not a microphone that beginning singers or musicians choose for themselves. It’s best suited for use in a studio where it can really shine during recordings. The higher price tag makes it a good option for advanced or professional musicians who are recording and need to make sure that they have a clear and bright sound. Because it offers 3 polar patterns to choose from, this microphone is great for solo artists, duets, and even to record a band. 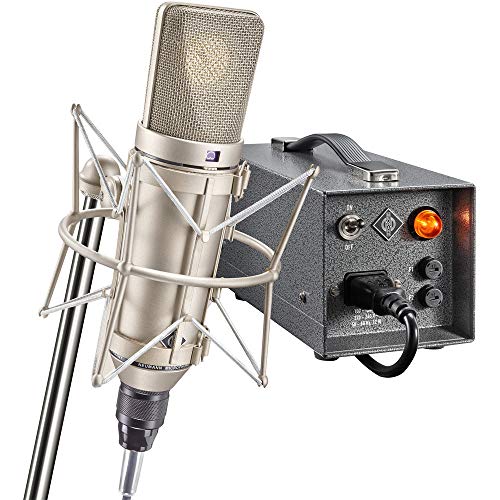 Neumann U67 Collector S Edition Large-Diaphragm Condenser Microphone
Check Price On Amazon Learn More
If you buy from Amazon, we earn a very small commission at no charge to you.

Primary Features of the Neumann U67 Reissue

One thing that really sets the Neumann U67 Reissue apart from other microphones on the market is that it is an exact replica of the original U67. This means that fans of this original microphone will be able to enjoy the power and smooth sound of the original in an updated package. Other great features include:

Neumann included mylar as the capsule membrane, and this is held in place with a brass ring instead of the original glue. It’s small updates like these that really set the Neumann U67 Reissue apart and make it such a powerful and reliable choice.

The Neumann U67 Reissue has silky high ends as well as deeper lows, making it great for recording most any kind of music.

Alternatives to the U67 Reissue

If you love the sound and power of the Neumann U67 Reissue but aren’t sure that it’s a great option for you due to budget, then you may want to consider the Neumann U87. This switchable studio microphone is also made by Neumann, which means that you can enjoy the same high-quality attention to detail as on the Neumann U67 Reissue. It has three directional patterns to choose from and great handling and response.

Another wonderful alternative to consider is the Sony C800GPAC studio condenser mic. This has a ton of power and is known for being incredibly responsive, which is great for musicians who want complete control over their sound and tone when in the studio. It is a little lighter than the Neumann U67 Reissue but has a higher price tag, which makes it a good option for professional musicians.

Conclusion – Is the Neumann U67 Reissue a Good Choice for You?

The Neumann U67 Reissue is not only visually appealing but also an incredibly powerful microphone that is a great option for any studio recording artist. No matter if you are setting up a studio at home to record your own music or want to create a more professional recording location, the Neumann U67 Reissue won’t let you down.

The problem that a lot of musicians will run into when considering the Neumann U67 Reissue is the higher price. This can make it difficult for some musicians to choose this microphone, and that is why it’s such a great option for professionals or more advanced musicians who are ready to take their recording abilities to the next level. If you want to really showcase what you can do and are looking for a microphone that offers you the power and control that you need to sound your best, then you will want to consider the Neumann U67 Reissue, but only if you have the budget for it.

Our Sennheiser E614 Review Founded shortly after the end of WWII, Sennheiser introduced the first open headphones in 1968. They began producing headsets and then

Finding The Best Handheld Microphone For Your Church The Sennheiser e935 handheld microphone is a cardioid dynamic microphone with solid construction and reliable sound, making

Our Telefunken U47 Review Founded in Berlin in 1903, Telefunken was a German television and radio apparatus company. They were the first company to design

Our Shure KSM44A Review For almost 100 years, Shure has been manufacturing high-quality electronics, including earphones, personal monitor systems, headphones, and microphones. They are known

Our Shure SM27 Review Shure has a long history of being highly innovative and pushing the boundaries when creating audio electronics and microphones. They are

What Are the Best Microphone Brands?

Who Makes The Best Microphones? What are the best microphone brands? The most popular options include Neumann, Shure, Audio-Technica, Sennheiser,  Rode, and Blue Microphones. These