The Midas brand has produced some of the best mixers over the years. Their products have been used in professional studios by some of the biggest names. The Midas M32R is one of their latest products and may provide the perfect solution for professional live or studio recording.

The Midas M32R is a digital audio mixer featuring a total of 40 input channels, 16 microphone preamps, and 25 buses. It is a professional-grade mixer used in medium venues, churches, recording studios, and home studios.

The M32R was first released in 2016. While the product itself has not received any revisions since the initial release, the firmware has been updated several times. However, these updates have not added a lot of features. They are mostly minor updates to the interface and settings in the companion app and software.

Who Should Use the Midas M32R?

Midas has created a versatile digital mixing console that is suitable for a wide variety of settings. It is designed for all types of musicians, including amateurs. However, it does have the internal structure to support professional studio recording and live events like your worship services. The M32R is also expandable, which allows it to be used in a greater range of venues and large churches.

The Midas M32R typically costs a little over $2000. It is neither the cheapest or most expensive mixer. The price may be too expensive for hobbyists and amateurs but for the smaller to medium-sized churches it is affordable.

Beginners may also struggle to familiarize themselves with the controls. The faders, inputs, and variety of buttons can be overwhelming, especially if you have never used a professional-quality digital audio mixer. So make sure your sound person is familiar with a top-notch sound system.

What Do You Get with the Midas M32R? 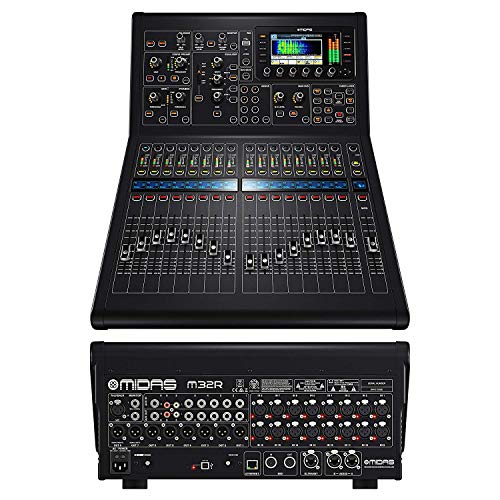 Midas M32-R Digital Console for Live and Studio
Check Price On Amazon Check Price On Sam Ash
If you buy from Amazon, we earn a very small commission at no charge to you.

The Midas M32R does not come with accessories. When you unpack the box, you get a mixing console and a power cable. It is not equipped with microphone or instrument cables. However, it does come with rack rails so that you can mount the console on a standard audio rack.

The M32R is a heavy console. When you lift it out of the box, use caution and bend at the knees as it weighs a little over 40 pounds.

The Midas M32R is a powerful mixing console with the features that you want in a digital board. The main feature is the 16 Midas microphone preamplifiers. These preamps ensure that you get professional-quality sound, depending on the mics that you connect.

There is a total of 40 inputs on the Midas M32R. You get 16 Midas preamplifiers with XLR inputs. There is also a variety of outputs and digital I/O ports.

The M32R is housed in a desktop frame constructed of high-performance aluminum and high-impact steel. It is incredibly durable, making it suitable for the road. It is also the standard rack width, allowing you to mount it in an audio rack. The M32R even includes rack rails in the box.

The layout of the faders, controls, and display may overwhelm beginners. However, it is still relatively uncluttered compared to other digital audio mixers. The faders are split into two groups of eight.

These faders are also well-built. The pro faders have been tested and rated for use up to one million cycles. This rating is about three times as long as other leading mixers.

It should be mentioned that this mixing console does not always come with an instruction manual. Luckily, you can find video tutorials online to help you master the controls.

These controls include virtual FX effects. You get more than 50 processors, including 16 new FX processors that Midas developed specifically for the M32R. These processors use the Midas True Physical Modeling technology, which results in quality emulation of class processors including the Fairchild 670 compressors.

Automating your shows is also easier with the M32R. As expected with a digital audio mixer, the M32R allows you to store settings and console layouts. It is also equipped with a cue list feature that lets you store up to 500 entries. These entries may include up to 100 snippets or scenes.

The Midas M32R also includes a small five-inch color TFT display. This color screen displays the current board layout and EQ settings. However, if you want to view the full settings and features, you need to connect the mixer to the mobile app. Midas M32R uses a mobile app and software that is nearly identical to the app and software created for the Behringer X32.

The most comparable product to the Midas M32R is the Behringer X32. It is hard to discuss one of these products without mentioning the other. They both feature a total of 40 inputs and 16 Midas-designed microphone preamps.

For those who are overwhelmed by the interface of the M32R, the Behringer X32 may be the better option. It has a streamlined interface and an easy-to-use mobile app that allows you to control the mixer via an iPhone or iPad. It also about half the price of the M32R.

While the X32 is cheaper, the Midas M32R does offer more digital effects, equalizer settings, and control over the faders.

Conclusion: Is the Midas M32R Worth the Price For A Church Sound System?

The Midas M32R is not the most expensive digital mixing console. For those who are willing to spend a little over $2000, is the M32R worth the cost? The answer depends on the features that you need.

With the Midas M32R, you get a total of 40 inputs. There are 16 professional-grade microphone preamplifiers that help deliver exceptional sound to the mixing console. You also get a wide range of digital I/O ports and analog outputs.

The only issues that you may experience with the M32R include difficulty understanding the settings and layout. Some users have mentioned that their M32Rs did not include an instruction manual, which can make it difficult to understand.

The layout and routing can be confusing for novices. However, this is a pro mixer. It is intended for those with experience using high-end digital mixers and it is available at a reasonable price. In the end, it offers great value for churches and offers amateurs a chance to improve their sound and experiment with a great mixer without spending a fortune.

Check out how this church plant used the Midas M32R for their worship team.

We hope our Midas M32R review has helped you.

Behringer DEQ2496 Review – Get The Perfect Sound Out Of Your Music

Our Behringer DEQ2496 Review Getting the very best audio possible, either for a live performance or for the studio, is going to take some work.

What is the Difference Between an Analog Vs. a Digital Mixer?

Analog Vs. Digital Mixer Both an analog mixer and a digital mixer can deliver fantastic sound, but they represent different ways of thinking about the

Our Behringer EP4000 Review Getting the most power possible out of your sound setup is going to be important when you’re a musician. You want

Best Soundboard for Church And Other Houses of Worship

Our Tascam DA-3000 Review Tascam is headquartered in California and, while credited as the Portastudio inventor, is known for manufacturing low-cost multitrack recorders that are

Finding The Best Live Sound Mixer For Your Church Worship Team The Allen & Heath GL2400 mixer is designed for live performances. It features 6