Finding The Best 8 Channel Mixer For A Small Church

The Soundcraft EPM8 audio mixer features eight channels and 48-volt phantom power for use with condenser microphones. It may also be the best eight-channel mixer available. It will work great for small churches or church plants that need a good mixer at a great price.

Who Should Use the Soundcraft EPM8 Mixer?

The Soundcraft EPM8 audio mixer is a straightforward eight-channel mixer that does not provide a lot of extra settings, such as a multiband equalizer or FX settings. However, it does provide a reliable soundboard for recording or live sound.

The EPM8 audio mixer is affordable, which makes it a great entry point for those that are buying their first professional-quality mixer. The less expensive price and the simple layout provide an easy piece of equipment for beginners to practice with. It is also useful when you need a less expensive board for your small worship team or church recording projects, such as web content, video productions or podcasting.

You may also use this in a small studio or for live streaming in small churches. It does include two auxiliary sends. However, the lack of effects needs to be considered.

When you need to upgrade the number of inputs on an existing system, the Soundcraft EPM8 may also be a good choice. As mentioned, it does not include a lot of onboard effects or EQ settings. If your existing console includes the effects that you need, the EPM8 may be a good expansion board. 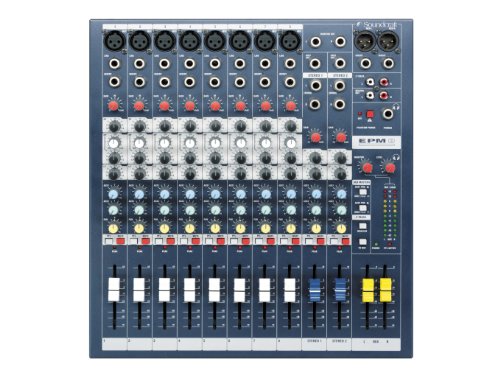 Soundcraft EPM8 High-Performance 8-channel Audio Mixer
Check Price On Amazon Check Price On Sam Ash
If you buy from Amazon, we earn a very small commission at no charge to you.

What are the Main Features of the Best Eight-Channel Mixer?

The best eight-channel mixer should offer eight channels. However, there are more details to consider, including:

With an eight-channel mixer, you know that you get a total of eight inputs. You also need to consider the output configuration. Some boards may have two auxiliary sends while others may have additional outputs. Determine how many outputs you require before choosing the right eight-channel mixer.

The layout of the board is also important to find the best mixer, especially if you are learning how to use a prograde audio mixer. The best eight-channel mixer should be easy to use and provide a simple layout.

You may also require equalizer settings, quality faders, and various effects. Some mixers may not include a lot of these features, providing a streamlined interface. For example, the Soundcraft EPM8 has a stripped-down design that focuses on the quality of the unmixed sound that it delivers.

The final considerations include the overall reliability, sound performance, and quality of the mixer. Some mixers are simply built better than others, due to the experience of the manufacturers.

Why Did We Choose the Soundcraft EPM8 Mixer As The Best Eight-Channel Mixer?

The Soundcraft EPM8 is a small mixer with solid features. It includes eight GB30 microphone preamps and two auxiliary sends. The I/O configuration should suit small worship teams and individuals needing an affordable mixer for home recording or video announcements at a church.

The GB30 microphone amplifiers are another great feature of the EPM8. These preamps offer high transparency to ensure that you get clear sound. It also has 48-volt phantom power for use with all types of condenser microphones.

The Soundcraft EPM8 also stands out thanks to the simple interface. With fewer channels, there is less clutter on the board layout. These features make it easy to use, whether you are an experienced sound engineer or novice. The streamlined interface is also due to the limited features of the eight-channel mixer.

What We Like and Dislike About the EPM8 Mixer

The EPM8 is affordable, compact, reliable, and it delivers quality sound for its class. The Soundcraft EPM8 typically costs less than $250. It is one of the more affordable mixers offered by a highly-rated brand such as Soundcraft.

The EPM8 is also compact and portable. You can easily carry it with you to a performance or store it in a small case. Housed in a metal chassis, it measures 11 x 3.5 x 14.25 inches and weighs just over 11 pounds.

This is also a reliable little mixer with quality sound for its price. It should suit your needs for a multi-purpose room and for use in a small church. It is also a suitable option for upgrading your existing system.

The Soundcraft EPM8 has a couple of limitations, including a lack of onboard digital effects. However, if you are using this console to expand an existing mixer, you may not need onboard effects.

Why Should You Consider Buying the EPM8 Audio Mixer?

If you need a basic eight-channel mixer with no special features or effects at a low price, the Soundcraft EPM8 audio mixer is your best choice. It is a compact analog mixer with six mono inputs and two stereo inputs. While it lacks EQ and FX features, it does deliver reliable sound when paired with quality mics.

While it does offer three-band and two-band equalizers, it lacks further EQ settings or onboard effects. If these are not major issues, the EPM8 is the best value for your money.

The Soundcraft EPM8 audio mixer is one of the top eight-channel mixers and is suitable for a variety of uses. You may need to expand your system or buy your first mixer.